On a cold day a few weeks ago, I’d bought a scarf at a night market after comparing prices at two stores. It cost NT$270, not super expensive, but that’s almost a week of breakfasts, or two dinners.  I complained that the scarf was a little too big to my host mother, and two days later, she’d given me a smaller, and much cheaper scarf. At that moment I felt like I should be paying more attention to my income ( which is NT$4000 monthly from my host club, and NT$400-500 for breakfast each week from host mom) and expenses (all meals, transport, clothes, and anything for fun).

To keep track, I downloaded a free app called Dollarbird onto my phone. It looked pretty simple to use.

You could add categories for any type of expense you have. 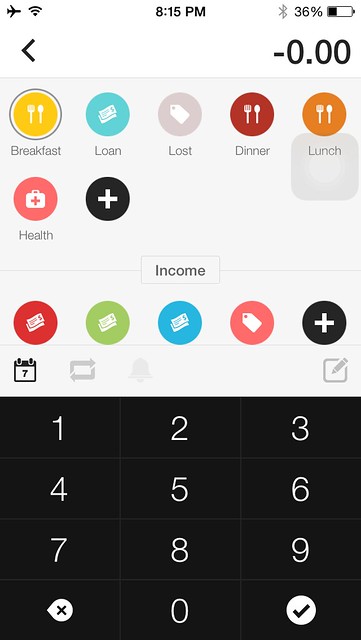 You can see, per month, what your biggest expense is. 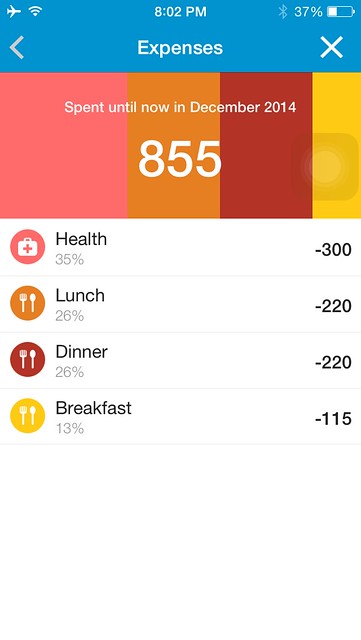 My favorite part is the graph that charts your balance as it changes over time. 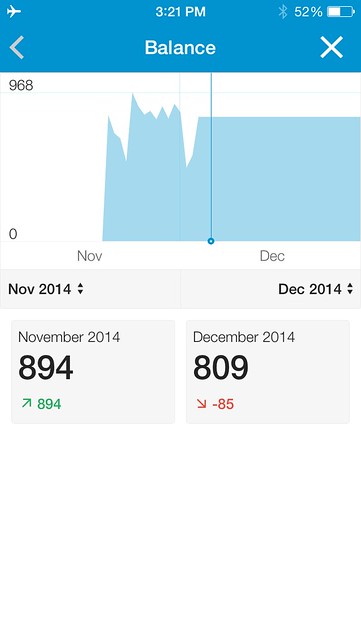 I was in love with this app, gleefully subtracting $60 for each breakfast, looking at the graph go downwards, until every Sunday evening, when it hopped back up by $500.

Then the problems began troubling me.

First, there was the problem of scale. I had about NT$8000 when I started using the app, plus ~$500 in my wallet. If I counted my starting balance as $8500, then each time I ate breakfast(only NT$60 at most!), the graph would barely change at all. I decided to keep the NT$4000 I get monthly from the club, plus the NT$8000 I had stored already, in a “bank” and not count it in the app. Therefore, I made my balance the amount in my wallet (NT$500), and for the rest of the lifetime of the app, the graph showed only the balance in my wallet.

Second, there was the small problem of representing my MRT pass. I added money to it once every couple weeks, but I wanted to see an impact on the graph each time I used the card. This way I can see how many times I used the MRT each week, instead of how much I paid to put money on the MRT pass every few weeks. Therefore, I decided to only deduct money from my balance when I used it for transportation, not when I took money from my wallet and deposited it into my MRT pass.

Third, it is really hard to keep track of small change.

Fourth, there were so many grey areas when I used money for non-regular expenses. For example, when I had to pay NT$300 to add texts and call time on my phone, I deducted it from the chart because it could be a regular expense, but also only happens once every three months. Also, what about chewing gum?

And the graphs turned out to not look so pretty. I wished that each data point would be a spike, then lead to a flat valley of non-spending, the length of the valley directly related to the time between transactions. But I realized that there are no flat lines, only straight lines going from one data point to the next (look at the last of the three photos posted above).

I am deleting the app soon. It was a good month or so with Dollarbird. I hope I will start it again later in life, when my expenses and income become more straightforward (I will include ALL my money in the starting balance). And when I get back to the US currency.