The 13 hour flight from San Francisco to Taipei was 13 hours but they went by quickly. There are many contributing factors:

1). I flew United Airlines for the first time, and it was great because they served free meals, snacks, and beverages pretty frequently, and they had a great movie collection (there had to be at least 70 movies and TV shows which could be played on command from a personal screen).

After the lights went out (signaling that it’s “nighttime” in the day of the plane. I’m not sure if it was nighttime in California or over the Pacific where the plane was at that moment.), stewardesses walked down the aisles with trays of water cups, and that was something I’d never seen before. 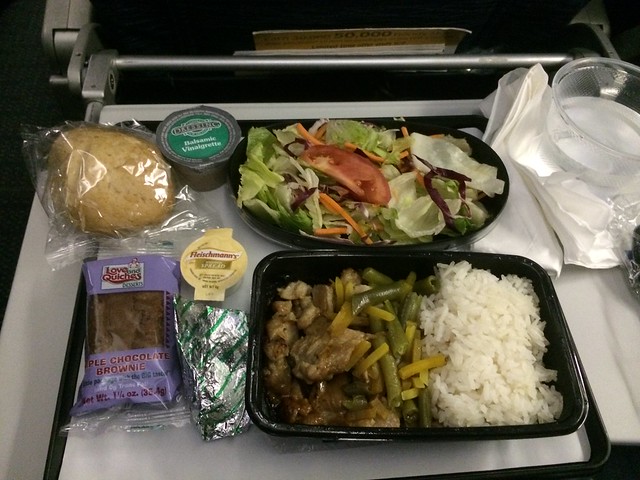 I figured out that to avoid jet-lag, you should pay attention to your sleeping schedule in the plane. Since I left San Francisco in the afternoon and would reach Taiwan in the evening of the next day, I stayed awake so that when I reached Taipei, I would be ready to sleep. It worked!

2). I was probably used to sitting down for long periods of time because one month earlier I’d sat in a car for 6 hours each day for 6 days in a , when my family drove from Illinois to California.

Taiwan is really humid and hot. My bedroom in my host mother’s apartment (my host mother is living by herself now because her husband is mostly in China for work, and her son just left for Germany on  Rotary Youth Exchange) is the only place with an AC that is on, but the wifi only works in the humid living room that has its windows open. The view from the apartment (we’re on the 10th floor) is really cool in the mornings: The first day here was tough because my host mom took me to a rotary group’s meeting in Yi Lan, which on the north east coast of Taiwan and a one hour drive from Taipei. After a gigantic seafood feast with 13-14 people at one round table, we got a tour of a nature center and a presentation from a professor who works with the Yi Lan community, and then we got another tour from Mr. Coffee (his nickname) who is building a giant 4-5 story coffee factory/museum near the ocean.

Mr. Coffee put a lot of thought into the building. He made sure the roof saves rainwater, and that customers at the museum get plenty of exercises by walking the stairs. The factory/museum was half built, but we walked through all of it. Mr. Coffee made the views really nice from inside the building, with open-air staircases (and even bathrooms with no ceilings) and balconies. The rotarians were planning a musical event that will take place on the beach in Yi Lan so we scouted out many spots along the coast of the Pacific. We were actually a day’s drive away from our final destination, Palo Alto, but we wanted to take a detour to Lake Tahoe, California, so we had to stop at the end of the day in Sacramento.

We stopped in Reno, Nevada, for lunch at a Taiwanese restaurant called 101 Taiwanese Cuisine. A large section of downtown Reno was blocked off for an antique car show/competition, called “Show-n-Shine”,  as part of Reno’s Hot August Nights, a six day festival in downtown Reno. There must have been over one hundred classic cars on the road, shined for the occasion with their doors and hoods popped open.

Owners often sat in lawn chairs on the sidewalk next to their cars.

Everything in Reno was also really big. In Nevada, casinos are legal, and it seemed like every building downtown was a casino.

The streets were often tiled by some sort of fake stone formation. The streets seemed sticky and smelled of urine and other bad things. The people were friendly in giving directions.

We stopped at Lake Tahoe, California, for only 45 minutes at most, because we were eager to get to our hotel.

We still have a few more hours of driving to Palo Alto tomorrow, then the Journey West section of my blog will finish, and the California section will begin.