My family seems to be attracted to small towns no matter where we go, perhaps because we’re from a Midwestern college town in Champaign, Illinois.  We’ve visited two small Californian towns twice each already, and we just tried out another town: Morro Bay.

Morro Bay is a seaside town with a population of 10,000. This is the view from our motel.

Evenings and mornings were chilly. Bayfront Inn was great; they gave us free fish n’ chips coupons and cinnamon roll coupons for local businesses (we only stayed in Morro Bay for about 14 hours so we didn’t have time to use the coupons). The inn also left us complimentary salt water taffy from a local store, Capri Sun pouches, and water bottles. 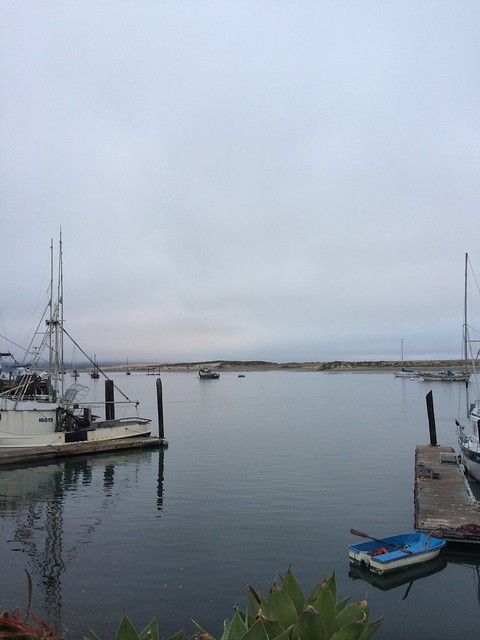 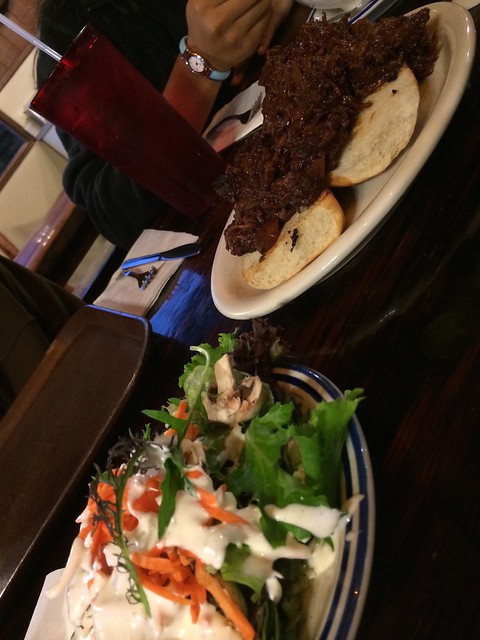 Every restaurant in Morro Bay advertised fish n’ chips, but I still got a barbecue sandwich. Really big portions!

The coolest time to walk around Morro Bay is in the morning, because of all the fog. There was thick fog that didn’t quite reach ground level. The giant rock in the first photo in this post was completely obscured by the fog. 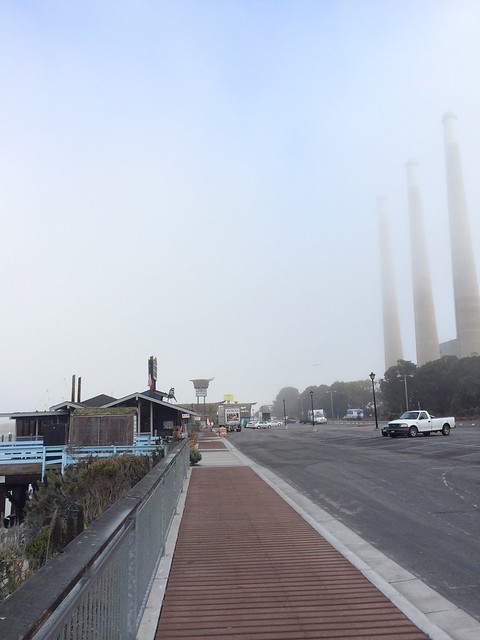 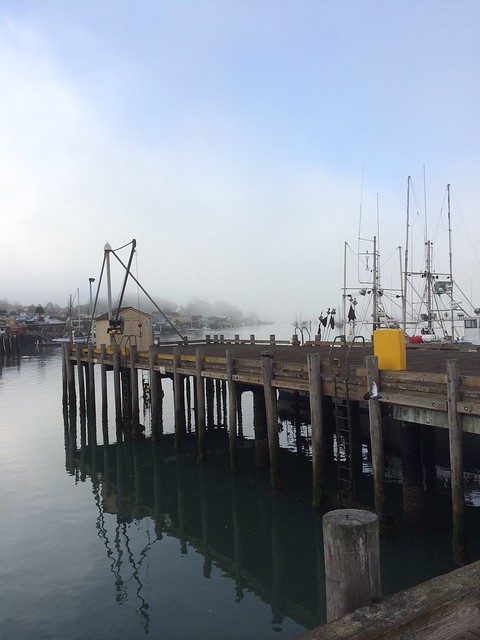 The dock above smelled horribly of fish and just of the sea. There were pigeons as well as seagulls, and I’d never seen pigeons in a seaside town. 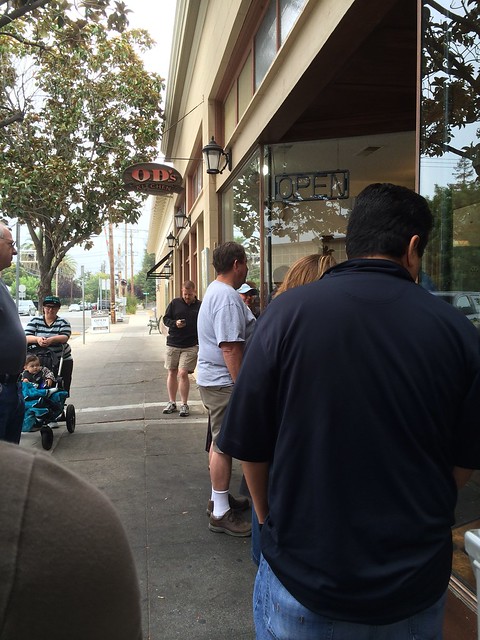 We started off our journey to Ojai at OD’s Kitchen in Gilroy, CA (population 50,000), for breakfast. Locals lined up ten minutes before 8 am and chatted before the restaurant opened. The locals were talking about some sort of festival in Gilroy where you weren’t allowed to bring beer to drink after eating, then a Vietnam War veteran began talking about how during his time in Vietnam he drank more beer than water.

The locals were friendly to us foreigners and when one local recommended a dish on the menu, I decided to order it: “When in Rome, do as the Romans do.”

He recommended the “Rosebud”, which was a “Kitchen sink” (chopped up potatoes and ham) plus biscuits and gravy topped with an egg. He also recommended the thickly sliced bacon, and we ordered that too.

We got to Ojai in the evening after driving south for about 5 hours. We’d been here exactly two years ago, and we’d loved it. Ojai (pronounced Oh-hi) is a small town of 8,000 in the Ojai Valley.

1). Last time we were here, we visited the Pepper Tree Retreat, the former home of Indian philosopher J. Krishnamurti.

2). There is a place called Meditation Mount which holds monthly meditations on the full moon. We were lucky enough to visit on the full moon this time, and attended the meditation, which started about an hour before sunset. 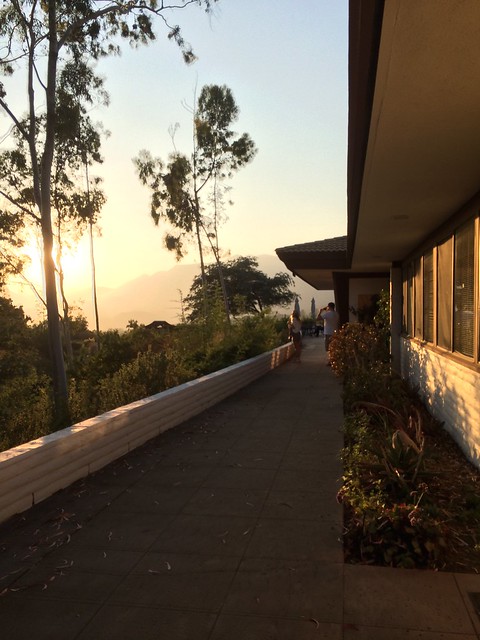 There was a 30 min music session where a young man played relaxing music on a keyboard while everyone (30 ppl or so) sat in a circle on chairs, then two speakers talked about helping humanity by accessing the wisdom from our souls. The sessions stressed unity with each human being. This was the first time I’d heard of this so here’s more information: http://meditationmount.org/meditation-information/about-meditation/

Once the sun set and we’d sat in silent meditation for 10-30 minutes (I have no idea how long my eyes were closed) the leaders of the meditation led everyone outside onto the terrace and we released something we’d built up through meditation out into the Ojai Valley to help humanity. 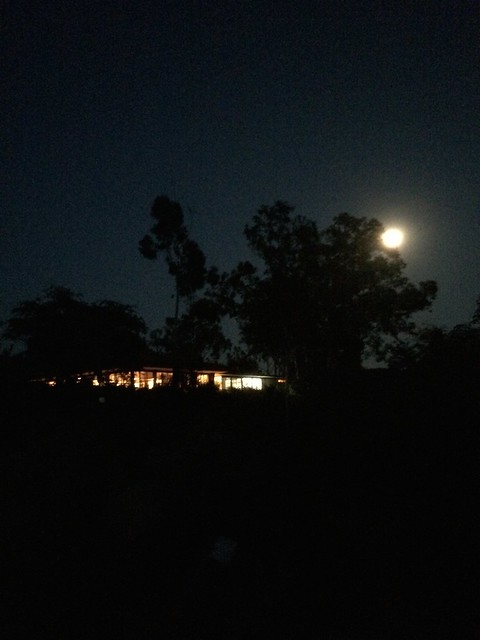 3). The third thing we liked about Ojai were the burritos of La Fuente Restaurant: http://www.yelp.com/biz/la-fuente-restaurant-ojai.

Three types of salsa, each spicier than the next.

We came here two years ago and ate burritos in the hot sun outside the small restaurant because the only sitting room was outside. We liked it so much that we ate there twice last time.

This time we came here at 8:30 after the meditation on Meditation Mount for some evening food. We were glad to see that the restaurant had expanded to the adjacent store space as well, so we could sit inside. The carne burrito wasn’t as good as I’d remembered it. 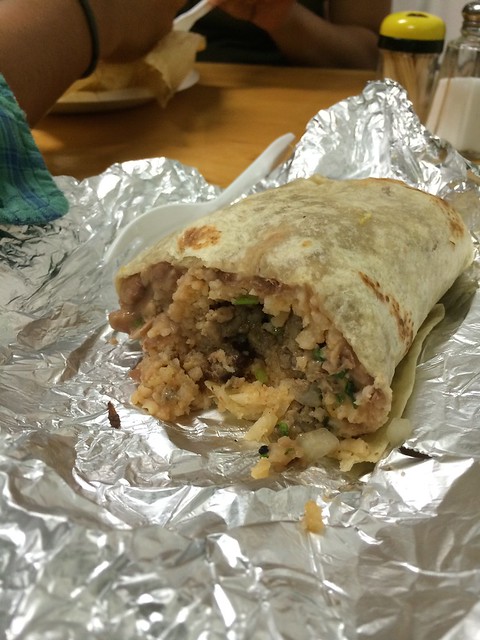 Carmel (a.k.a. Carmel-by-the-Sea, (Carmel pronounced Car-Mel(Mel like the name))), California: We’d been here exactly two years ago as well. It’s a really small, touristy town of 4,000, and the only place we’ve been to in this town was downtown. The seaside part of Carmel is also an attraction but we never left downtown.

The streets were so cobbled and sloped that apparently the municipal code prohibits high heels longer than 2 inches unless you have a permit. 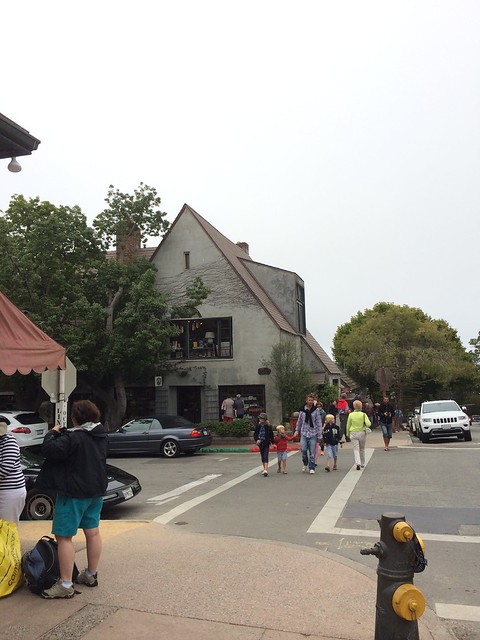 The main reason we never left downtown was a restaurant called Dametra Cafe, which served excellent Greek food. We were glad to see that Dametra, like La Fuente in Ojai, had expanded into the adjacent room. The best part about Dametra was that last time we were here, a cook came out from the kitchen to sing a song to the entire restaurant. A tall, grizzly, hook-nosed man came out to introduce the chef, holding a bouzouki, which looked like a guitar with a broken neck, and a few drummers sat in the back of the restaurant and the short, old chef began to sing.

We learned on this visit that the chef sings at least once every day at random times. And as luck would have it, he came out to sing right after we’d ordered the check.