First, a picture of my class during lunch watching a video about HIV/AIDS. This is the first time the TV has been used this year. Every classroom’s TV turned on and played the same video at the exact same time. Everyone was fixated on the TV for the entire lunch period. 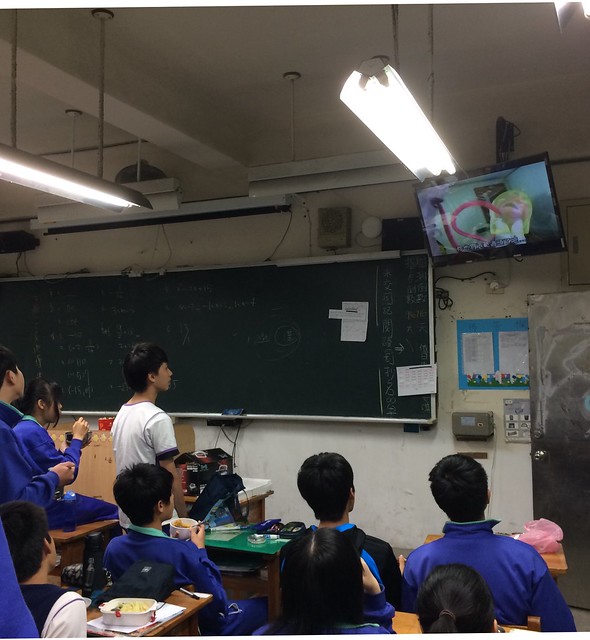 Back to the title topic.

Today on the way home from school I was walking alongside a park. It was cold (61 degrees Fahrenheit- but with the humid air in Taiwan, it felt much colder (I had on a cap and a scarf in addition to my long sweatpants and jacket school uniform)), but there were still people running and walking around the park with tank tops and shorts.

For exercise since I’ve gotten to Taiwan, I’ve ran around the park 3-4 nights so far, but mostly have done pushups and abs workouts in my room, or recently have started climbed the stairs in my apartment building. There are always people running and walking around the park, no matter what, except when its raining (people associate wet hair with getting a cold here). Finding time to exercise is difficult, because my school starts at 7:30, sometimes 6:45, and ends at 5, sometimes 6, and I’m tired from walking home every day.

Cutting to the point, I saw a man jogging in jeans, a polo, and normal sneakers. If I’d seen this man  three months ago, before I’d gotten to Taiwan, I would have scoffed at him, and thought what an amateur, he’s not even dressed properly for exercise. In America, I had plenty of time and space to go on runs. The traffic wasn’t so bad in my hometown that I had to worry about the time spent waiting for my sister after dance class, or for a carpool parent who’s late. I could easily get home, relax, then drive back to pick someone up. Long waits aren’t necessary in small towns where you can get back home from the center of town in 15 minutes.

But now, when I even have trouble finding time to exercise, I can understand why he isn’t dressed for exercise. Perhaps he’d just finished his shift at work and is waiting at the park for his child to finish school. Maybe he’s taking advantage of every minute that’s given to him, efficiently using the 10-15 minutes of waiting for his child to exercise. Also, the traffic in Taipei is horrible, so the dad could have been getting some exercise in while he was near a public park (hard to find open space in Taipei compared to American cities).

I guess it took a change of scenery for me to realize that every person lives in a different context, on a different timeline with different rules and events. Coming to Taiwan put a big curve in my timeline, bringing it closer to the jogging man’s, so that’s why I didn’t judge him today.