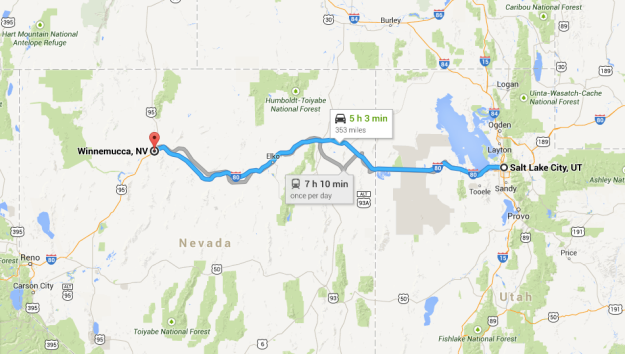 Today was another day of great views while driving. The drive in the remainder of Utah after Salt Lake City and the first portion of Nevada, with the exception of ten minutes of mountains, was much flatter than yesterday’s drive. My family realized that we all like flatter landscapes as opposed to hilly landscapes, even though we all assumed that we were tired of the flatness of Illinois.

The flat roads played tricks on our eyes like I’d only seen happen in the movies. In the very West portion of Utah the land was really flat and we thought we’d seen a lake in the distance, only to find out that it was a mirage when we drove closer.

A few minutes later we stopped at a rest area near the Utah-Nevada border that was definitely the most interesting one we’ve stopped at so far.

Before this rest area, we’d seen small salt fields, probably 100 square meters at most. Behind this rest area was a salt field that extended into the horizon. It looked exactly like a snow-covered iced-over lake. The late morning sun reflecting off the nearly perfect whiteness led to some really cool photos.

The last stop we made before lodging at Winnemucca was the California Trail Interpretive Center in Elko, Nevada. It was crammed with senior citizens that came in a group which arrived in a large black charter bus. The center had many interactive displays and videos about the gold rush and the hardships that people faced between 1841 and 1869 traveling in covered wagons to reach California.

We learned that America had been populated with tons of buffalo before the settlers came in and wastefully killed most of them. We got a little bit of an idea of how difficult the journey was; settlers were traveling around 15 miles a day by wagon or by foot, and the sick and dying  were often left on the side of the road. The trail was littered with dead animal carcasses, broken wagons, and all sorts of luggage that was discarded to lighten the load for tiring pack animals.

It is hard to imagine how difficult it had to have been for these settlers to travel the distance we’d covered on our Journey West. We were exhausted at the end of each day from sitting in a car, while these settlers covered the distance the hard way. We have so many measures of security with technology nowadays but the settlers were risking their lives for an unknown future.

Today was by far the best drive so far in the trip. Also, for the first time I got photos of us driving across state borders: 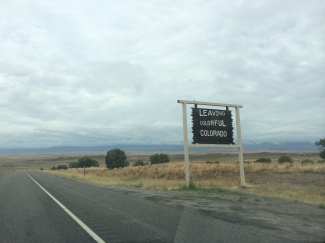 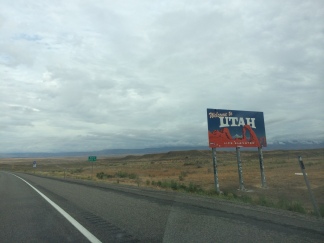 The rumble strips on the side of the road got longer than I’d ever seen. They seemed to be 2-3 times longer than usual, with the same amount of spacing in between each strip. After a few hours we stopped at a rest area that was on top of a ridge. The road had run straight up a small mountain. There were more trees at this rest area, a result of the elevation I think.

NEVER lose your sunglasses on a road trip in the middle of nowhere!

When you drive long distances in the midwest…

…the weather seems to be always changing.

Another highlight of the trip: The Church of Jesus Christ of Latter-day Saints in Temple Square in Salt Lake City. Inside the gates of the compound that included the Temple, we met with several very friendly sisters who were enthusiastic in telling us about Mormonism. Apart from the stereotypes, I had no idea what Mormonism was.

My dad was really happy to get a copy of The Book of Mormon. 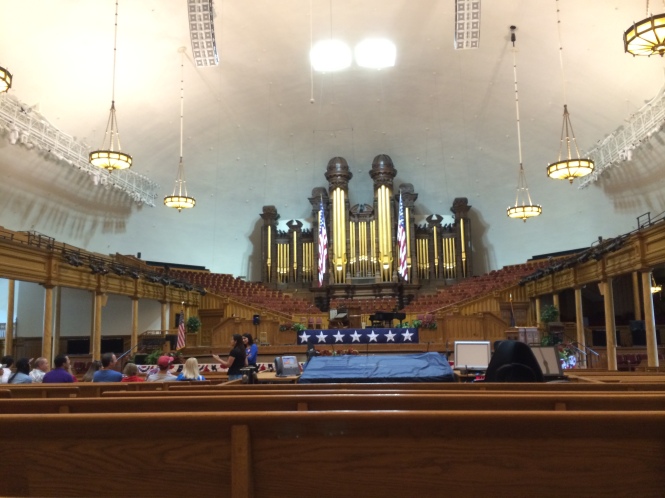 Part of the tour that the sisters gave included sitting in the tabernacle. The acoustics were so great (the ceiling was made using bridge-building technology in the 1860s) that you didn’t need a microphone to address the entire audience from the front. The sisters said there are no secrets in the tabernacle.

Something that I found really interesting about Mormonism was that a lot of emphasis was put on the family as a unit. The sisters told us that nowadays most of us think that the individual is the basic living unit. However, the family is made of people whom you can fully trust.

The weather cleared up towards the end so we could walk around downtown Salt Lake City.